Anastasia Zotova: Whom has Judge Dudar sent to prison?  A Few Words About Ildar Dadin and his Case

Get acquainted. This is Ildar Dadin. This attractive young man with a pony on his shoulder is, in the opinion of Judge Natalya Dudar, dangerous to society and must be isolated from it. So dangerous that he must be sent to prison for three years. (This is more than the prosecutor requested) 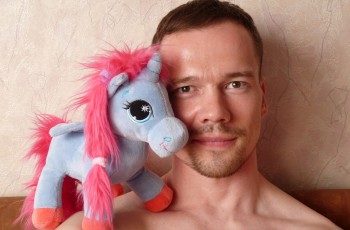 “But what for?” you ask. For what crime is a person torn from his family, his mother and father, his nieces and nephews, the girl he loves? Did he rob someone? Assaulted someone?

No! Ildar exercised the right, granted him by the Fundamental Law of Russian Federation (the Constitution). Ildar spoke out against war and for peace. He fought for non-violence and advocated for freedom and the rule of law.

… In December, police threatened him twice: “leave, or we’ll bring criminal charges.” He hasn’ t left because “this is our country, and we must fight for happiness and freedom for our children.” But he solemnly promised me to be more careful. In December, when those on Manezhnaya Square protested against Oleg Navalny’s sentence, we didn’t stay.

Then there were wonderful holidays — and the 15th of January: people promised to protest again in support of Oleg Navalny. I remember almost every second of that day: how we woke up late and didn’t manage to have a normal breakfast, how we went to the subway and Ildar promised me that he would just go and look — like an OSCE observer. He deliberately took all ribbons* and political buttons off his coat. He stood by the subway station and watched what was happening.

But when people with St. George ribbons began to beat women with white ribbons — he didn’t stand back. He got involved and tried to escort the women away. Immediately he was seized and taken to the paddy wagon. They took him to the Meshchansky police department, where he was beaten and choked. And then to the Tverskoy court. Where he was sentenced to fifteen days, beaten and choked.

And then — they sent him for two weeks to the detention center. And then — they took him to Basmanny Court where they opened criminal proceedings. At the hearing, they put him in a car and took him to the investigator. Lawyer Ksenia Kostromina was at the trial, but they haven’t told her where they were taking Ildar. Right in front of her they just put him in a car — and he disappears from view…

And then they dismissed the January 15 episode: they understood that since Ildar had already served 15 days, a second punishment would be superfluous. Now they opened a case for December 5, when he and others walked along Myasnitskaya Street with a banner.

There are three more episodes in Ildar’s case: August 6 — the day they arrested him on Manezhnaya Square for no reason, August 23 and September 13 — individual protests. Individual protests — which don’t require approval.

And that lovely photo with the slogan “I Am Charlie”, that everyone uses, was made on January 10; they arrested Mark Galperin and Vladimir Ionov on that day and the incident was to be a part of their criminal trials. But they didn’t arrest Ildar — I remember, because he went to the policе department to submit a statement as a witness of unlawful detention!

He always demanded that the police carried out the law. He is a person who sincerely wants to make the country in which he lives better. His favorite phrase is “honor and humanity above all.” A real man and a true knight!

For me personally, Ildar is the dearest person on earth, who fed me from a spoon when I was sick and carried me in his arms to the bathroom when I sprained my foot. He played me songs on his guitar and brought me breakfast in bed. He cooked it himself — like so: [photograph]

I don’t know how I’m going to live without him for even two weeks.

You know, 33 is an excellent age to suffer for good, justice and the happiness of people. At least, so thought one guy with long hair who knew how to walk on water.

And Judge Dudar will burn in hell. There is a special place there for corrupt judges.

Your ticket for the: Anastasia Zotova: Whom has Judge Dudar sent to prison?  A Few Words About Ildar Dadin and his Case

Anastasia Zotova: Whom has Judge Dudar sent to prison?  A Few Words About Ildar Dadin and his Case